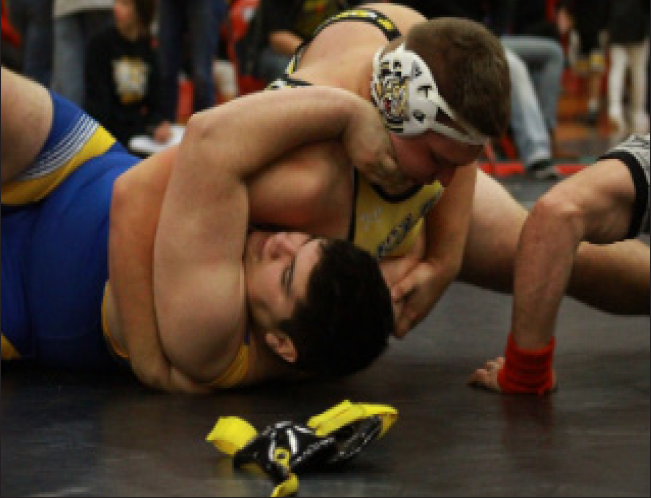 Pictured above is senior Daniel Landando wrestling against a Joliet Central competitor. Photo courtesy of @JolietWWrestle on Twitter.

Joliet West has been lucky to have successful seasons for most of the team sports, including the wrestling team. They started conditioning in the early fall in preparation for the season and their first meet that they hosted on November 21, 2019.
For a lot of competitors it takes an immense amount of patience and integrity to succeed, but a great coach also pushes a team to reach their goals, break records, and to be the best they can be. head coach Charles Rumpf has been coaching for several years at West and says that the importance of having seasons be successful is learning from the past and reflecting. This season is unique with this one having several seniors and 4-year wrestlers on the team. Rumpf stated, “This has been really beneficial because I appreciate all of their leadership.”
Even with the uniqueness of each season, the team often carries similar goals. Rumpf stated, “Our goal is always to win the IHSA Class 3A State Championship. We set a culture of high expectations; however, the focus is always on improvement and getting better each day.” With such a positive and hard working coach, the competitors also share the mindset, in this hopes of achieving this goal.
We got the chance to talk to one of the captains from the team, senior Daniel Landando. In an interview, the talented wrestler said, “So far as a team this season, we’ve been working hard. We’ve come together and we have had some tough loses, but we’re going to rebound as a team and battle as we usually do.” Landando is one of four captains along with Jeremy Pullen, Louisa Schwab and Nick Gantt.
As seniors are finishing their time at Joliet West, they are preparing not only for college life, but setting goals for their futures. Landando also stated in the interview regarding recruiters and college wrestling “I am excited and it feels good to be able to get recognition after four years of hard work.” Right now he has a record of 23-2 and hopes to place top 6 at the IHSA state finals this year. He has future goals to coach and become a middle school teacher in the Joliet area.
Right now the team is enjoying a successful season with a dueling record of 8-4 and placing at every tournament they have attended thus far. If you’d like to see these talented competitors in action then you can attend one of their upcoming events. They will be at Lincoln-Way East on January 29 and Plainfield East January 30. As they prepare for the end of the season and the IHSA series, they hope to reach their goals and break records with bright futures for further seasons.
With bright hopes and great dedication, it shouldn’t be hard for this talented team to reach all the goals they have set. For more updates on the team you can follow them on twitter @JWwrestle.