Is Cody Parkey to blame in Bear’s wildcard loss to Eagles? 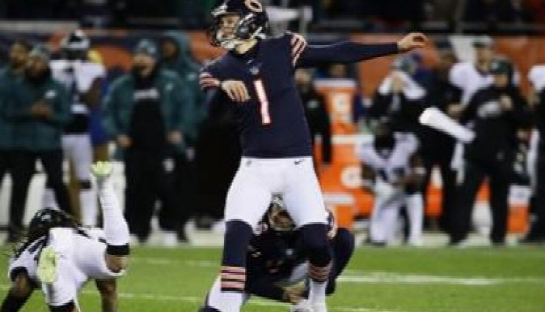 It has been eight years since the Bears have been in the postseason. The stage was set, and the Bears were taking on the Eagles Sunday night to keep the hopes of a Super Bowl ring alive. It was a very close game through all four quarters going back and forth between the two teams. It came down to the final minute in the game when the Eagle’s wide-out Golden Tate scored a touchdown on a flat route and put the Eagles up by one point with fifty-three second left in the game. With a forty-four-yard kick return by Tarik Cohen, it set Mitch Trubisky and the offense up to show how much they have improved this year. The offense was able to drive down the field and set up Cody Parkey with an opportunity to win the game with a forty-three-yard field goal attempt. The first attempt went straight through the uprights, but the Eagles called a timeout before the ball was snapped. On the second attempt, the kick hooked left and hit off the left goal post and cross bar. With everyone is shock, the Bear’s season would end on a missed field goal attempt.

Immediately after the game, all the blame went down on Cody Parkey. Though he did miss a game winning field goal, Cody Parkey should not get all the blame put just on him. Although Mitch Trubisky had a good game for his playoff debut, the offense was not able to score enough points to get the job done. A lot of people are forgetting that Cody Parkey did have nine out of the fifteen total points the Bears scored in the game. The defensive side of the ball is also to blame. On third down, Adrian Amos was penalized with an unsportsman like conduct call. The penalty kept the game winning drive for the Eagles alive. Also, on the fourth and goal, Bear’s cornerback Sherrick McManis can’t allow Golden Tate to get to the outside to score the game winning touchdown. These three major events throughout the game also come into play.

Days after the game, Cody Parkey went on the Today Show, to talk about missing the game winning field goal. Cody Parkey stated “Football is what I do, it is not who I am.” Though the interview was interesting, Coach Nagy was not happy with what Parkey had to say. Nagy said, “It’s not a ‘me’ thing, it is a ‘we’ thing.” This meant that throughout the interview Parkey kept bringing up and defending himself, instead of talking about the organization and how they lost together. Even though there were different events through the game that hurt the Bears, Cody Parkey has one job and that is to make field goals throughout the game when it matters, and he was not able to do that.

This off season should be very interesting with how the Bears are going to address the kicking position. Coach Nagy ensured the media that Cody Parkey will have competition for his job next season. Even though Cody Parkey lost the game for the Bears, he is not all to blame. All in all, it was a great season for the Bears and look for them to build off it next season.