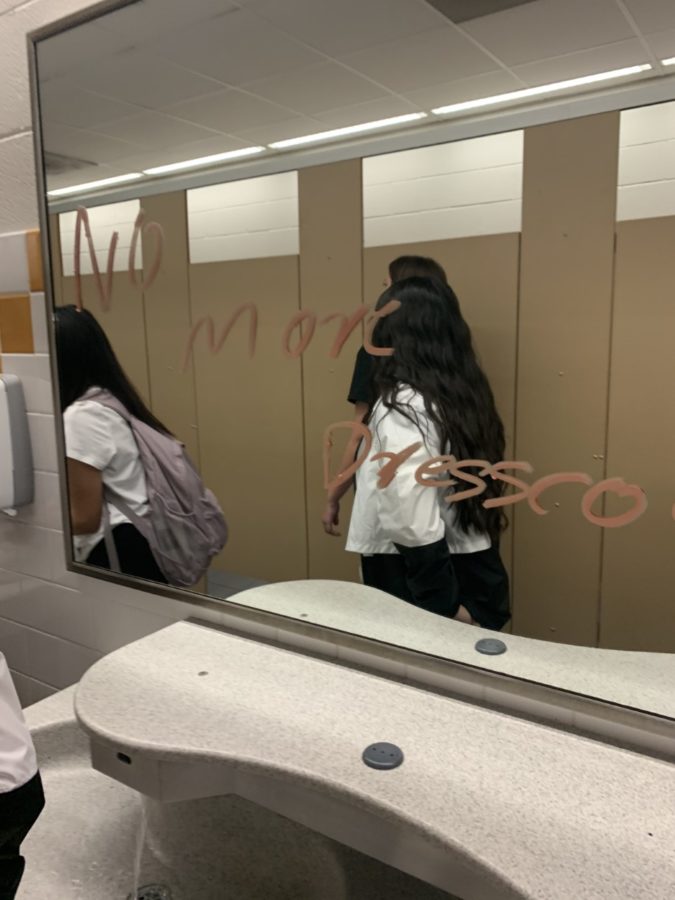 Messages such as "No More Dresscode" were written on bathroom mirrors.

Within the first week back of the 2021-2022 school year, many Joliet West students were displaying their disapproval towards the school’s dress code. Now, students are turning their frustration into action.

After seeing the vandalism in the girls’ bathroom during the first week of school protesting against dress code policy, Joliet West senior Juliana Locasto decided to take a different approach to fight for changes.

“The thing that inspired me the most [to create the petition] was seeing girls around school be looked up and down and made to feel uncomfortable by school staff,” Locasto said. She touched upon her experience with being dress coded, mentioning that she too was made to feel  ashamed for wearing something so average as a sweater with a tank top to school.

Multiple individuals who signed the petition in support expressed their outrage on change.org’s website.

“I’m signing because our clothes we wear have nothing to do with our education,” wrote user Bella C. “We are NOT a distraction.”

User Emily Aguirre received the most likes for her comment under the petition. “Us girls need to stop getting sexualized for showing shoulders, legs, or chest,” she continued, “THIS IS OUR BODY! LET US WEAR WHAT WE FEEL COMFORTABLE IN! We need to change this dress code and it needs to happen now!”

Many students who are in support of the dress code believe it is inherently sexist as female students are dress coded disproportionately more than their male counterparts. As seen in the comments with the petition, advocates for a policy change believe that the idea of feminine clothing being seen as a distraction by school faculty sexualizes female students.

“Their job’s to make me feel comfortable, not sexualize me,” Joliet West junior Gianna Ronchetti commented in response to how the staff handles the dress code.

Not only do students feel that the current dress code is sexist, but they feel it is racist as well. This year, Joliet West announced that students can no longer wear durags and bonnets at school.

As an African American, junior Devin Thomas believes this change excessively targets students of the same race. “Some people of my culture need the bonnets and durags to take care of our hair,” he said. “That’s just something we need to do. I don’t feel like it should be against the dress code.”

With these strong opinions in favor of dress code policy changes, reception to the petition has been overwhelmingly positive. Not only do students seem to be in agreement with the petition, but teachers are, too. “Most of the teachers I have talked to support us and have offered to help, including my dean,” said Locasto.

But one major advancement in this movement for change has not only been support from students and staff; it has been the principal’s acknowledgement of this movement.

Just days after the petition was posted, Locasto shared that Joliet West principal Dr. Teresa Gibson had seen the petition, and offered her support for these grievances to reach the school board. According to Locasto, she has already met with Dr. Gibson. The two revised Locasto’s letter that she presented at the September 21 school board meeting.

If the board does not acknowledge the demands set forth by Locasto, she said there is “plan in place” to “hold a peaceful protest at a later date.”

A few weeks have passed since the school year started and the petition was created. However, Locasto touched upon the fact that the goal of this movement remains the same. “We are all still staying positive and focusing one step at a time. It’s not a race, it’s a marathon.”

Updates from the Sep 21, 2021 school board meeting to follow.