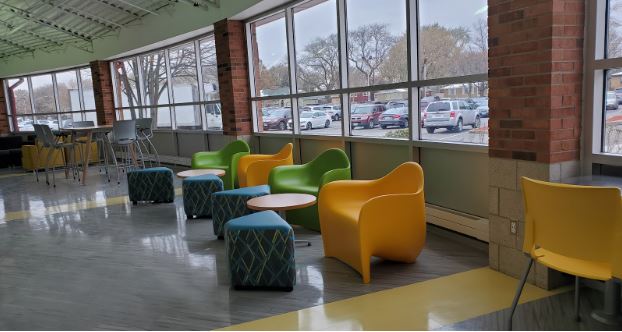 The round hallway adjacent to the cafeteria at Joliet West got a makeover during the summer that created a completely different environment for students.

The Collaboration Corridor is an area designed for students that are taking blended courses; it gives them a space to relax, socialize, and get work done on days that they don’t have class.

The space is divided into six sections, each having one of three different furniture sets: lounge chairs with ottomans and small tables, high tables for group work, or counters with both high and low chairs.

In addition to the new seating, there is new flooring, electrical outlets, acoustics, and paint.

The idea of the space came from the Joliet Central campus, as they built in several of these areas when they remodeled. However, because of the limited space at Joliet West, this is the first time that something like this has been able to be created.

As stated in JTHS’s Annual Report of the 2018-2019 school year, “‘The corridor previously served as an empty hallway that students passed through on their way to class,’ said Joliet West High School Principal Dr. Teresa Gibson. ‘Now, we see students using this space all the time to study, complete homework, or to socialize with friends. It is a bright, welcoming area and a great upgrade to our beautiful campus.’”

The entire renovation took about a year to complete according to Wooten, the lead organizer of the remodel.

However, that’s not the only student center that they plan on making.

“We’re actually looking at another space for [the] future,” Wooten admitted. “The space we’re looking at is that H building foyer.”

Since that area is often used for science experiments and after-school activities, the furniture will have to be able to be easily moved.

Wooten explained that she isn’t entirely sure when this next project will occur, as there are many things to consider such as the one mentioned previously. However, she did say that it is being put into consideration.

On top of the new Collaborative Corridors, the library and auditorium are getting makeovers of their own.

The library is getting completely remodeled, with new furniture, flooring, and equipment, while the auditorium is just getting things such as the lighting and sound systems fixed.

These renovations won’t begin until the summer of 2020, though, so the new student center will have to do for now.

The Collaboration Corridor will be open for use by students in after-school activities starting second semester.