The way we dress does not mean “yes” 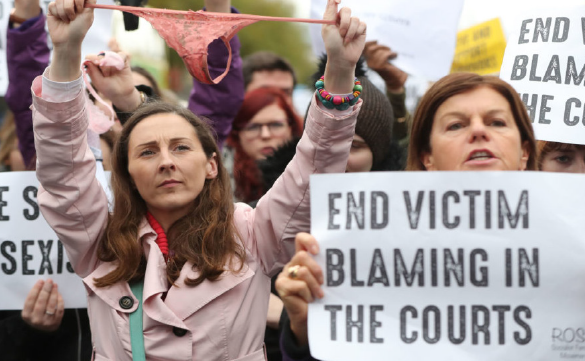 Towards the end of 2018, people across the world were filled with shock and disgust when a man who is 27 years of age was found not guilty when accused of raping a 17 year old girl, especially after the defendant’s lawyer, Elizabeth O’Connell, stated in her closing argument that the jury should have regard to the way the girl was dressed, since apparently, the way we dress might mean yes.

On November 6th, 2018, the court case of this young girl was brought in front of a jury, and like many other rape cases, this one simply didn’t get the justice it deserved. O’Connell stated “Does the evidence out rule the possibility that she was attracted to the defendant and was open to meeting someone and being with someone? You have to look at the way she was dressed. She was wearing a thong with a lace front”. The blame in this situation is immediately moved to the girl, simply just for what she wore.

Consent was the main issue of this case, and as per usual, was completely disregarded. Not only was what the girl was wearing irrelevant to the argument O’Connell was making, but it also could have taken a toll on the victims mental health. This relating back to a court case from 2002, where another rape victim was told she needed to hold up her underwear as evidence, and later took her life from the toll that moment had taken on her.

Many who heard of this case were immediately disappointed in not only the outcome of the case, but possibly even the Dáil (Irish Parliament). One woman specifically even pointed put that there needs to be a change in their law’s, since cases like this only seem to blame the victims. Ruth Coppinger, the woman who decided to express her opinions on this to the Dáil since she believed that this way of victim blaming is just becoming a routine for courts to fall back on.

Social Media movements have sprouted from this, with the trending #ThisIsNotConsent. Many women all around are posting pictures of their panties and asking the same question, “does this mean yes to you?”. Politicians, actors, and many others spoke out on this topic, and it has made one thing clear, there needs to be a fix. Women aren’t at fault when it comes to something like this, especially if it’s because of the way they express themselves.