JROTC walks for a cure 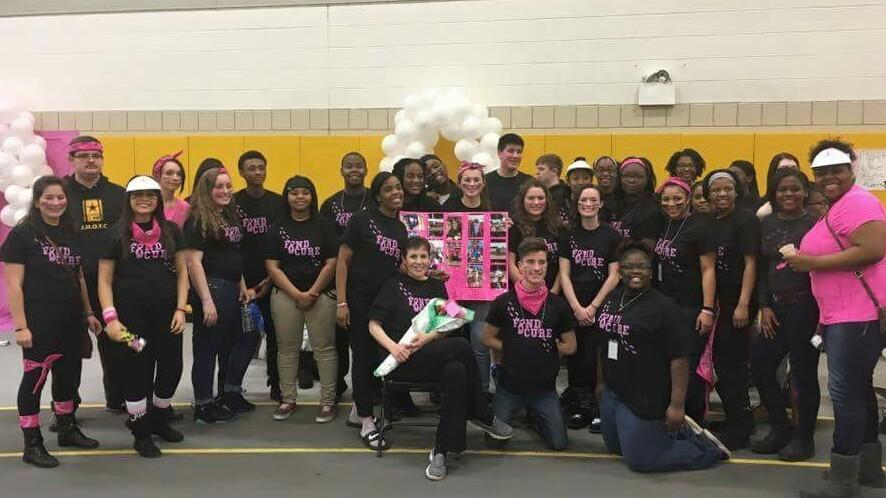 Cancer is a disease that can hit anyone. It is something that doesn’t understand mercy or limits. It will and has hit those young or old, boy or girl, white or black, rich or poor. It is obviously not something that anybody would want, for themselves or an even an enemy. And one way or another, it has hit everybody, whether it be themselves, or arguably worse, someone they love.

Emily Koscielski, a freshman student at Joliet West, was unfortunately one of the many to have been affected. “My mother was diagnosed a few years ago,” she stated, “She’s currently with stage four breast cancer.”

After hearing the news herself, Lakiya Vaden, company commander of JROTC Bravo Company, decided to take action into her own hands with her position in the program. “We were just talking about the whole cancer event that was held every year,” Emily explained, “After a while, I mentioned my mother, and right off the bat she decided what this event was going to aim for, my mother.”

Vaden herself also has an explanation for her actions, which were more than sudden to Emily as she explains how the two only met this year. “After hearing Emily talk about her mother’s situation,” Vaden said, “My heart just broke. I didn’t know her too well at the time, we just met this year. But I also knew how no one should ever have to go through anything like this and I wanted to help.”

That seemed to have been more than enough motivation for her to put together the annual JROTC cancer awareness event, all entirely dedicated to Emily’s mother. She worked frantically and did everything she could to spread the word, going from making posters and spreading them all over the school, to contacting local businesses and getting them to provide vendors for the event.

And it all seemed worth it the night of the event came.

Although with months of preparation, Vaden and the rest of all JROTC had to keep word of it all from one person. Ereen Koscielski, Emily’s mother.

“She had absolutely no idea about it,” Emily admitted, “She knew that there was an event being held by ROTC, she knew it was for cancer. She just didn’t know it was all for her.”

And one can only imagine her shock as she walked into the field house, finding all the posters, sponsors, vendors, and game all dedicated to her.

The night filled the field house with laughter and joy, despite the intention of it all being rather dark and serious in contrast. But when you think about it, the mood couldn’t have matched the necessary attitude to fight cancer with anyway. Sure the battle against is a dark and scary one, but that also means it is a fight that needs to be fought with smile, otherwise it truly wins.

And seeing Ereen and Emily hugging each other, smiling ear-to-ear, it’s definitely easy enough to tell they aren’t missing such an important asset.