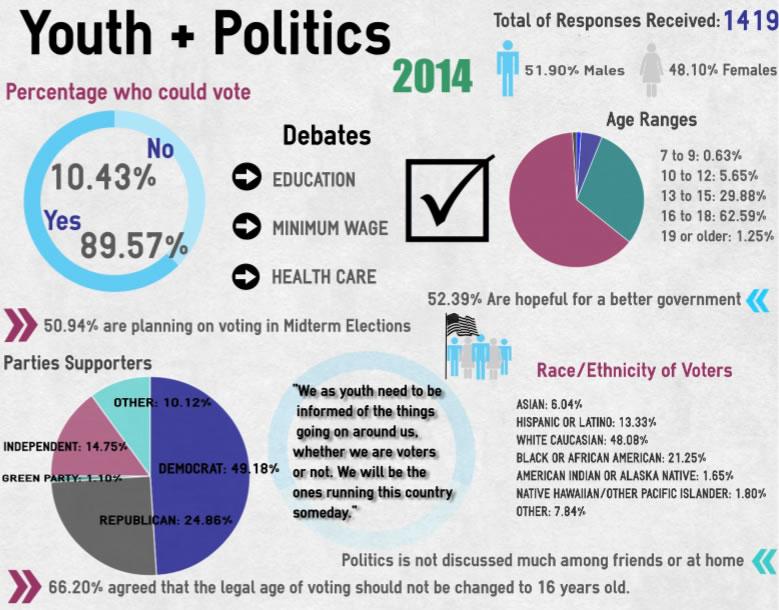 Modern-day politics have created controversy and sparked passionate debates. Typically, though, adults are given the primary voice when it comes to contemporary issues. Adolescents, on the other hand, are not always seen as valuable when it comes to elections and other voting matters. However, they still attain resilient views on today’s governmental matters; the thoughts of teens have the power to persuade politicians to target topics that future voters deem significant.

To begin, the majority of young people have shown to identify as democrats in a recent survey conducted by PBS News Hour. A staggering 49.18% of the 1,419 juveniles who participated favor the Democratic Party, while 24.86% identify with the Republican Party. As adolescents grow up with the influence of media, technology, and social sites, topics like marriage equality, legalization of marijuana, gun legalization, and women’s rights have continuously been put in the spotlight. With the younger generation typically being more open-minded and accepting than their elders, it is understandable that many teenagers relate to the more liberal side of politics. One student contended, “It’s important teens start getting exposed to [politics] at a young age and make their own decisions, rather than just regurgitating what their parents tell them. They need to be able to form their own political decisions.”

When questioned as to what political issue would most inspire them to vote, 48.78% of young people chose education. These days, education reform is on the forefront and students are attending college more than ever before. The National Center for Education Statistics released, “In fall 2014, some 21.0 million students are expected to attend American colleges and universities, constituting an increase of about 5.7 million since fall 2000.” Education has always been an important aspect of the traditional American dream, and it has become essential for success in the majority of current career fields. Students want an active role in their own educational lives as well as the educational lives of prospective pupils. In addition, the financial facet of education continues to impair students. One survey participant plead, “Please lower the college tuition rate I am begging you.”

Regarding the future of politics in the United States, 52.39% of juveniles remain hopeful and a close 47.61% claim that they are pessimistic. When asked if the government will be in a better or worse condition in a few decades, 41.33% answered better and an unfortunate 58.67% responded with worse. It seems as though teens have been disappointed by the corrupt politicians that have unfairly taken advantage of their authoritative abilities. One juvenile simply stated, “Politicians ruin everything.” Another student related to America’s money-hungry ambitions by declaring, “I think that this country could be a lot better if money was not our first priority.”

Furthermore, 66.2% of surveyors demanded that the voting age should not be decreased to sixteen. This response seems to stem from the fact that some students realize the ignorance of some of their classmates. “I think you shouldn’t be able to vote until at least 18 because you aren’t mature enough to make that big of a choice,” admitted one adolescent.

Also, most juveniles submitted that they lack discussion regarding political affairs with friends and family. The majority of young people admitted that they never discuss politics with friends, and most adolescents released that they only sometimes talk about politics with their parents. Discussing politics is not particularly interesting to some of the youth, and therefore teens do not feel the desire to talk about it amongst their peers. “I don’t care about politics,” one student said. Another similarly claimed, “I do not really have thoughts about elections and politics quite yet.”

Nonetheless, young people are increasingly becoming involved in political affairs and submitting their opinions about significant matters. As more students identify with democracy, the future of politics is bound to become more liberalized regarding social issues and human rights. Discussion regarding the topic will likely increase, and education will become an even greater priority for politicians in order to please future voters. Young people signify the future of the United States’ government; current ideologies suggest a decrease in republican implementations and a rise in democratic innovations.