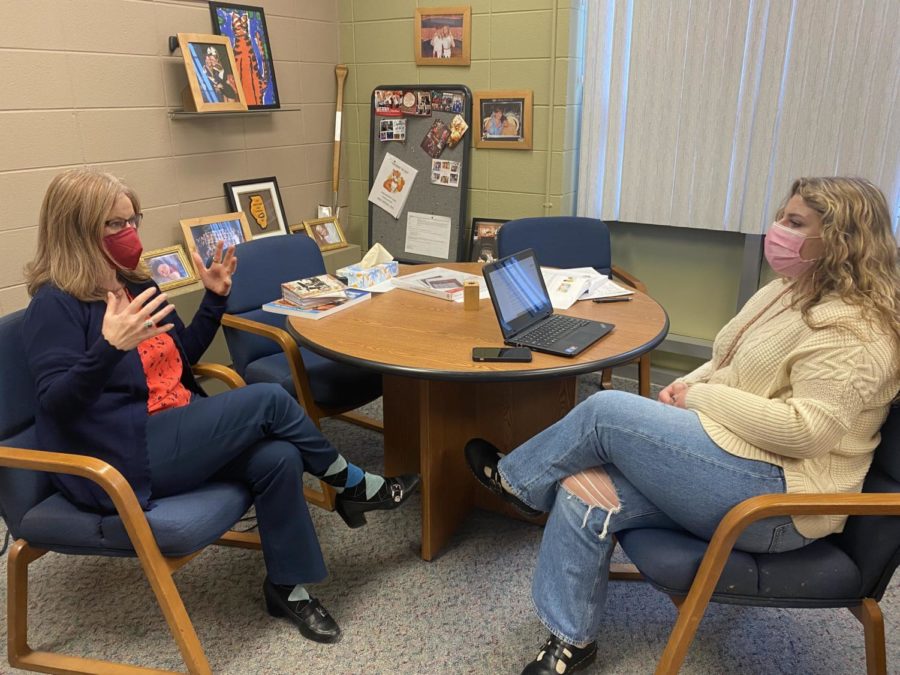 Megan Krok interviews Dr. Gibson on her stepping down from her position as Principal. Photo courtesy of Haley Maser.

After thirteen years as principal of Joliet West, Dr. Teresa Gibson has decided to return to the classroom. She will complete her administrative duties at the end of this school year, hoping to leave behind a legacy of equity and accessibility as she approaches retirement.

Dr. Gibson’s decision to assume the new position was officially announced on January 19, revealing that her primary reason to change her role at Joliet West was to hopefully “have more to give” to her family. Additionally, she revealed that she was no longer as happy in her position as principal.

“I was finding that I wasn’t as happy as I used to be,” she reflected, “so I needed to make a change. I want to make sure I’m making the greatest impact that I can on my community, on my school, for my family, for myself, and I just kind of felt like after thirteen years as principal, it’s time for somebody else to bring us to the next place.”

In her tenure as principal, Dr. Gibson has been nothing short of successful. In 2016, she received High School Principal of the Year and was a proponent in helping Joliet Township receive the honor of being named the Advanced Placement School District of the Year in 2017.

Academically, Dr. Gibson said, expanding the Advanced Placement program at Joliet West is one of her proudest accomplishments. “The year before I became principal, there were zero students on free and reduced lunch who took the AP test,” she said, “that’s appalling.”

To solve this problem, Dr. Gibson worked with different funding resources to guarantee that finances would never be a barrier for students. Through her efforts, the number of students on free and reduced lunch taking AP courses continues to increase. With this, Dr. Gibson hopes to leave behind a legacy of equity and access for students.

Considering that Dr. Gibson has only two years left before retirement, it may appear strange to some that she has decided to return to being a teacher rather than take on a different administrative position. “If anything, the pandemic has allowed me to really say, ‘Where can I do the most good?’ and in my last two years I feel I can do the most good working directly with students.”

Certain community members are also questioning if Dr. Gibson was pressured to leave her position as principal,
to which she responds that she is wholeheartedly making this decision on her own terms. “I truly believe I am in charge of me and I am in charge of my own happiness,” she said. “This has been a really hard year. I didn’t start the school year thinking I’d be making this transition, but for my own wellbeing and the wellbeing of my family, it’s definitely something I need to do.”

Dr. Gibson has not taught in a classroom for over fifteen years, so she definitely has some feelings of nervousness, but these are greatly outweighed by her feelings of excitement. Dr. Gibson explained that back when she taught AP U.S. History, she thought content was first and students were secondary. But now, she is excited to change her philosophy and approach teaching in a new way.  “I’m excited for the next two years to explicitly be student-centered. I’m teaching kids, not content.”

As Dr. Gibson’s time as principal winds down, she offers some veteran advice for whoever will replace her
position next year. “Consider input from a variety of sources, but at the end of the day, make the decision that is in
the best interest of the school community. Trust your gut.”

Best of luck on your future endeavors, Dr. Gibson!