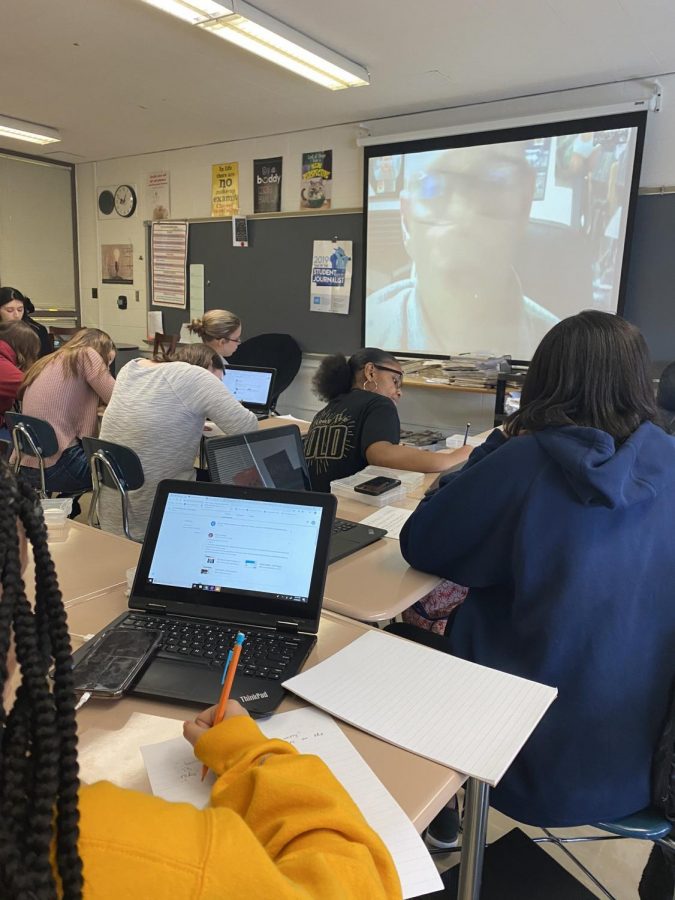 During Scholastic Journalism Week, students at Joliet West High School learned about the impact local journalism can have on a community.

According to the Journalism Education Association, Scholastic Journalism Week “celebrates student journalists who ask important questions about the world around them and thoroughly and accurately convey solid reporting to benefit the audience in a big way.” Students take that time to focus on the specific parts of journalism and learn how to improve their own reporting.

Journalism, which is the collection and distribution of news, has many different levels: regional, national, international, etc. Each level is important in its own way.

However, some argue that local journalism is one of the most significant because it can be more relevant to a community. One person that agrees with this is radio personality Kevin Kollins of WJOL and Star 96.7.

“I think to keep a local audience in a place like Joliet, it’s very important to be localized and talk about the local events that are going on,” disclosed Kollins.

This tip was one of many given by Kollins during an interview over Skype with the Joliet West journalism students on Feb 26. He offered a lot of advice to the amateur reporters and gave very detailed responses to their questions.

Kollins shared several examples of localized stories, once saying, “You know, it might be… the coronavirus is affecting the stock market right now. Well, we can bring that locally because [we can ask] ‘Are there any cases in Joliet?’”

Kollins also discussed the importance of choosing topics, finding local sources, and handling criticism from community members while focusing on the importance of local journalism during the thirty-minute interview.

Although this was a unique experience, it wasn’t the only journalistic event that Joliet West students took part in this week.

Senior and student director Mary Dixon was one of the four Joliet West musical cast members that appeared on the radio on Feb 27.

The students were featured on WJOL to promote their production of “Matilda the Musical.” The group answered questions asked by radio personality Scott Slocum and read a scene from the show.

“It was a wonderful experience to be able to share Matilda on air with people that listen to the station because it’s like… you… it reaches such a wider audience than we ever could by just posting posters,” confessed Dixon.

She further explained that many people have contacted her, saying that they bought tickets to the musical because they saw the interview online.

However, Dixon doesn’t just think that local journalism has a great impact on the audience; she also feels that it can have a large impact on the participant(s).

“If [the station] was larger, I definitely wouldn’t have felt as comfortable,” Dixon expressed. “I feel like we’d have had to try a little harder to put on a show, whereas local journalism definitely has the comfort, and you feel like you can be more real.”

The students were able to understand the impact local journalism has on reporters, audience members, and featured guests by listening to experienced journalists and gaining first-hand experience of their own.