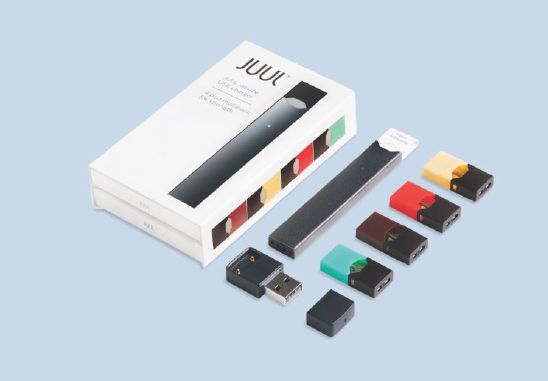 On November 13, 2018, the extremely popular e-cigarette company Juul announced they would be discontinuing their flavored nicotine pods in an attempt to combat the rapidly growing teen demographic of users and addicts. According to the New York Times, the ban is part of the FDA’s plan to reduce the amount of teenagers who vape, especially teens who were never addicted to nicotine in the first place. The Food and Drug Administration began their aggressive campaign to reduce teen vaping by making sure the companies aren’t targeting minors or glorifying their products.

Juul and other e-cigarette brands like it were originally created to help cigarette smokers quit by delivering a satisfying dose of nicotine without the dangerous carcinogenic ingredients that can be found in standard tobacco. However, with advertised flavors such as creme and mango in addition to a sleek, trendy design, Juul quickly became the most popular e-cigarette among nonsmoking teens.

Known as “the iPhone of e-cigarettes”, Juuls look like thin, black flash drives that easily fit into pockets and backpacks. Their appealing design, compounded with delicious flavors and an online community of people doing “vape tricks” with the vapor, led to a spike in teenage use of e-cigarettes. According to the New York Times, over 3 million middle and high school students reported using some form of e-cigarette last year, and considering Juul dominates 75% of the e-cigarette market, there’s a good chance they were using Juul. One third of those students from the New York Times survey said that the flavors of the e-cigarettes were important factors in using them.

However, one cartridge of e-cigarette liquid (Juul’s cartridges are called pods) contains the same amount of nicotine as an entire pack of cigarettes, and adolescents are especially vulnerable to the grasp of addiction. Studies from the Journal of Pediatrics also show that several of the chemicals used in the pods can cause cancer when heated, which is how most e-cigarettes work. Compared to standard combustible cigarettes, e-cigarettes such as Juul offer a safer option for nicotine consumption, but a majority of the youth who use e-cigarettes are nonsmokers. Safer is constantly being mistaken for safe, though, particularly among teens.

Many people fear the banning of juul pods will force teenagers to turn to more dangerous cigarettes to satisfy their nicotine addictions, but whether teens who vape also smoke is up for debate. Senior at the University of Illinois Katelyn Moser said, “”If Juul gets banned, I’d probably just quit,” according to DePaul University’s newspaper the Depaulia. However, for every student like Moser, there are most likely several students who switch to cigarettes.

Following the ban, many people took to Twitter to express their concerns. Teens in particular were angry about the Juul pod ban, despite the fact that far deadlier assault rifles are still legal. “Y’all really got mango juul pods banned before AR15s,” said Twitter user @souljaguac. The tweet currently has over 11.2k retweets and 35.2k likes. The inclusion of AR15s for comparison comes from the recent school shootings, in many of which the assault rifle was used. A large portion of the replies to the tweet argue that the right to bear arms is constitutionally protected and cigarettes kill more people annually than guns.

As most do, the debate on Twitter gradually died down, but the subject still affects teenagers across America. Since no long term studies have been performed regarding the use of e-cigarettes, the long-term effects of using e-cigs like Juul are unclear. Cigarettes themselves serve as haunting reminders of what used to be considered harmless, but turned out to be deadly.

However, nicotine is a dangerous and an addictive substance so its use should be avoided .