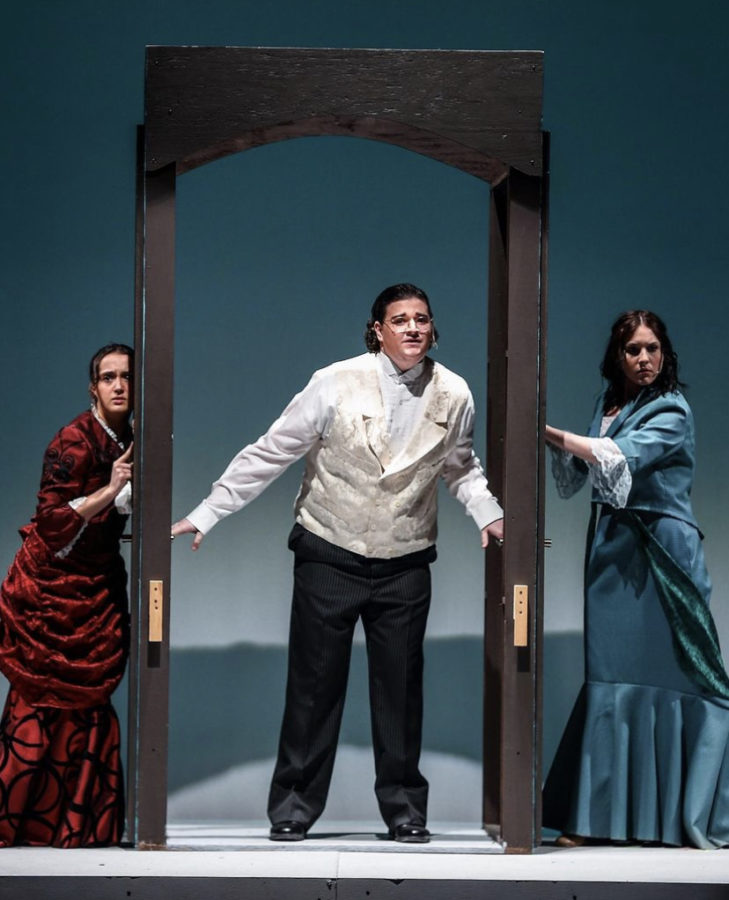 Payton Fraser, Micah Klima, and Kaitlyn Ruddy perform a musical number from “A Gentleman’s Guide to Love and Murder” in the auditorium. Photo courtesy of Jennifer Heim Photography.

After months of rehearsals, West’s production of “A Gentleman’s Guide to Love and Murder” held its opening night on Thursday, April 7. The show ran for three nights through Saturday with crowds filling the auditorium in support of the cast and crew.

“A Gentleman’s Guide to Love and Murder” follows Montague Navarro, played by Micah Klima, as he struggles to claim his birthright as a D’Ysquith through less than noble means. Kaitlyn Ruddy and Payton Fraser co-star as Phoebe and Sibella, with Juliet Tonkovic playing Miss Shingle. Zinnia Manning portrays a variety of the D’Ysquith family members alongside an ensemble of other performers.

“I enjoyed organically shaping the role into my interpretation of her character,” said Kaitlyn Ruddy on portraying Phoebe D’Ysquith. “Initially, this role seemed intimidating but the unwavering support of my directors and cast filled me with confidence.”

Additionally, the show was student-directed by senior Kaitlyn Gibson and led by choir director Mr. DeBoer. Members of the band provided the instrumentals for the show.

“Putting [on] a full show this year was both exciting because it meant light at the end of the COVID tunnel, but also intimidating because we were dodging the auditorium renovation and any sort of unexpected COVID surprises,” explained Mr. DeBoer. “In the end, it was cathartic to see an audience and progress in some version of normalcy.

Following the cancellation of “Matilda” in 2020 and a virtual performance of  “A Killer Party” in 2021, the musical marks the cast’s first live performance in two years.

“After two years away from performing, being able to put on a production for a live audience was magical,” shared Ruddy. “Stepping back onto the stage reminded me of why I started theater in the first place.”