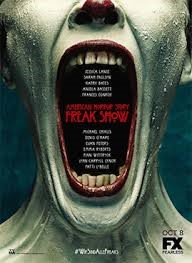 American Horror Story has been running for 4 seasons including the newest one which is labeled, as the title, Freak Show. The cast includes several favorites from the old season such as, Evan Peters, Emma Roberts, Jessica Lange, Kathy Bates, and many more. But, the cast also has some new comers such as, Mat Fraser playing the illustrated seal, Joyti Amage as Ma Petite, and Rose Suggins as Legless Suzi. All of these people don’t use special effects because they are just ordinary people with different bodies.

These amazing actors who all give the scenes all they have, live in a small town called Jupiter, Florida. The main characters all live during 1952, struggling in one of the few freak shows in America, with angry local people, a man looking to kill people of strange nature for their bodies, and an evil clown.   In several of the trailers you might see a clown with a strange knack for killing. If you are scared of clowns, be ready to be terrified, because Twisty the clown is nothing but.  Without giving too much away, later in the season a new clown steals the show.

I found the rating for this show to be expected. With sexual moments, violent scenes, and some explicit words, being rated mature is perfect. Sometimes, I felt that some of the over usage of these rated M moments were unnecessary, but this show is all about shocking the audience, and those moments do that.

I know that if you watched other seasons of an American Horror story, you might wonder if this season is just as good. In my opinion, in its message and horror, yes. What I got a strong sense of while watching this show, if that we are all freaks in some way or another. Those in the episodes those who look ‘normal’, later revile something strange or new about themselves. All of the actors bring something to the show, and the new cast does prove itself to be amazing. There is not ever a dull moment in the show. But, maybe someone so used to the other seasons might miss the paranormal aspects in this show, because there are very few. This season, has just as many jump scares, and as many uneasy moments. Maybe not as paranormal as other seasons it makes up for it with leaving me grotesque nightmares and lack of trust in clowns.